Hyperloop is an exciting concept, imagined by industrialist Elon Musk in the ‘Hyperloop Alpha’ whitepaper.  Hyperloop systems are looking more and more likely to come to fruition by the day, especially with the SNCF backed Hyperloop One. The success and adoption of such a radical solution to high speed transportation would transform the design and operation of mass transportation, and it’s worth considering how the transportation industry might prepare for this possible evolution. We are eagerly following Hyperloop developments and have outlined a few thoughts on what Hyperloop security could look like.

So, what is a Hyperloop anyway?

Hyperloops are ‘pod and tube’ based high-speed human transportation systems. The extremely high speeds are achieved through (1) the depressurization of the tubes (i.e. thinner air with less drag resistance) and (2) the reduction of friction by using air pockets (like an air hockey puck) rather than wheels for locomotion. In theory, these elements lead to a continuous flow of very high-speed pods flowing through a point-to-point network in a relatively resource efficient way.  The efficiency is further reinforced by the fact that the prototype designs for Hyperloop are energy positive, using solar panels on the outer tubing to provide the necessary electricity for the system to run.

The Hyperloop solution would be point to point, on closed tubes which are elevated by pylons to avoid potential damage from earthquakes and other natural disasters.  Due to the point to point nature of the system, the Hyperloop terminals will become a highly important element of the solution, and will likely be based outside of urban areas to avoid expensive land acquisition cost and potential NIMBYism.  In addition, stations are sure to echo the layout and design of airports more-so than traditional railway stations due to technical and regulatory restrictions placed/to be placed upon the Hyperloop. As such, airport security processes, as acknowledged by Elon Musk in the Hyperloop Alpha whitepaper, are likely to be the go-to security processes for these up and coming Hyperloop terminals.

The Hyperloop Alpha whitepaper imagines passenger flows as being a constant stream due to the ‘shuttle’ nature of the pods, rather than ‘pulse flows’ as one finds with airplane departures. Therefore, according to this conceptualization, passenger build-ups at security screening points would be unlikely.

Perhaps this hypothesis is overly optimistic.  Bottlenecks are still likely to occur due to passengers’ travel habits, with peak times and holiday seasons almost certainly overburdening passenger and cabin baggage screening processes. This therefore begs the question, what would a state of the art security system befitting of the high-speed Hyperloop look like?

Within the context of Hyperloop passenger and baggage security, there are two identifiable imperatives;

Within this context, it makes sense for Hyperloop security designers to investigate integrated security systems at both aviation screening checkpoints and borders to identify new and innovative solutions that will provide future Hyperloop travelers with a seamless journey.  Some key elements may include:

The implementation of these and yet-to-be-developed elements would go a long way in ensuring and effective and efficient security screening process for the Hyperloop system. At Lam Lha, we are excited about this project to revolutionize transportation and showcase state of the art in engineering, and we believe it represents a much-needed opportunity to truly evolve security screening processes.   We wish Hyperloop all the best in its development efforts! 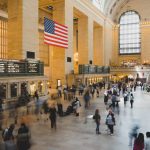 Digitalization & Aviation SecurityArchive
We use cookies on our website to give you the most relevant experience by remembering your preferences and repeat visits. By clicking “Accept”, you consent to the use of ALL the cookies. However you may visit Cookie Settings to customize your consent.
Cookie settingsACCEPT
Manage consent