In March 2004, twelve autonomous vehicles (AV) set off through the Mojave Desert to conquer a 240-kilometer course and take home a $1 million prize. The competition, organized by DARPA and dubbed the “Grand Challenge”, was meant to demonstrate the promise of then nascent AV technologies and spur innovation. None of the entrants finished the course. The vehicle that did best travelled less than 12 kilometers before getting stuck and bursting into flames.

Only 18 months later, five of 23 participants managed to complete the entire 240-kilometer course. All but one beat the previous record of 12 kilometers. Since then, tech giants like Google and Apple, major car manufactures including Ford and Mercedes Benz, and a litany of hungry startups have launched AV projects. Self-driving cars have navigated millions of kilometers safely on public roads, and that number will continue to climb. But, fatal accidents involving cars driving while their autonomous-systems were engaged, including an incident this past March where a self-driving Uber killed a pedestrian, have elevated public concern. While AVs promise to dramatically decrease the occurrence of traffic accidents (accounting for 2.2% of all deaths or 1.3 million deaths per year worldwide) and increase productivity, the tech, and public acceptance of AVs, is still maturing.

One of the biggest challenges facing self-driving car technology, dealing with the unpredictability and environmental complexity of navigating public roads, makes airports an excellent proving ground for AV solutions. Airport operations are also complex and unpredictable, but as stringent rules-based systems, they may present lower-risk opportunities to use AVs. Add to this a growing need for increased efficiency in response to surging passenger volumes, and it is easy to see why momentum for adoption of AV tech at airports is starting to build.

Rotterdam The Hague Airport (RTHA) and logistics company Vanderlande are deploying FLEET, a baggage handling system that uses AV technology. Leo, an autonomous robot developed by SITA that can check in, print bag tags and transport two suitcases has been on a whirlwind tour of the world’s busiest airports. AV ground service equipment is also finding its way onto the tarmac. French-headquartered company Easy Mile has developed both a driverless shuttle and autonomous baggage tractor. And, there are plenty of other roles for AVs at airports. IATA has pointed to over 40 potential uses for driverless ground-based vehicles including jet bridges, aircraft tugs, shuttles, baggage, de-icing and snow clearing, employee buses, maintenance vehicles, and passenger shuttles. Airport security will also benefit from the arrival of AV technology. This includes both the development of security-specific AV equipment such as perimeter patrol robots, and the ability to add security layers by integrating screening technologies into AVs that perform other tasks like parking cars.

To help usher AV technology into the airport ecosystem, LAM LHA is studying security applications of AV systems for the National Safe Skies Alliance. The report produced will assist airport decision makers in understanding how best to use AV equipment to improve efficiency and enhance airport security. Watch this space! 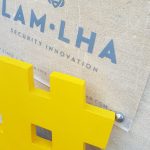